Although it may appear as the world is in tatters and rapidly spiralling downwards as we are hit by a continuous stream of bad news from all around the globe, it is actually - and has been for quite a while - improving for most people. Extreme poverty is down, education is up, health is up, war is down and so on. Considering these facts, two questions comes into mind: why does so many people think the world isn’t improving and why is it improving despite the fact that human nature hasn’t really changed much since we were hunter-gatherers?

As a Norwegian I identify myself with the western world and we usually regard ourselves as quite educated and blessed with a thorough understanding of how the world works. Although this is probably a worldview we share with most other people anyway. We are generally overly pessimistic when confronted with questions about how we think the future will look like. So why is it that so many of us share a world view that is so out of sync with facts?
.
The success of the human species is astonishing, by being able to adapt to any environment on the planet and collaborate massively, we have conquered the globe entirely and placed ourselves safely at the apex in the food chain. Starting out ages ago as small disperse bands and now living in a planet wide society.
We may not give it much thought, but being able to talk to a complete stranger without looking for reasons why you should not kill the other really makes the day more bearable, but this was probably how things went back when we were living in small bands, walking around and looking for stuff to eat. While it is quite subjective what constitutes a good life, not having to worry all the time about being killed frees up a lot of time one may make good use of. Life expectancy at the time was about 30 - 40 years and now hovers around 80 in the industrialised world. Child mortality has been steadily going down, much thanks to higher education levels. Women are regarded most places as first class citizens. Slavery is abolished. People has the right to be treated equal before the law. Everyone has the right to own property. These and numerous other small improvements has lead to the comfortable lives we enjoy today, albeit historically, often at the expense of others. The point is, life is much better now than it has ever been in human history. 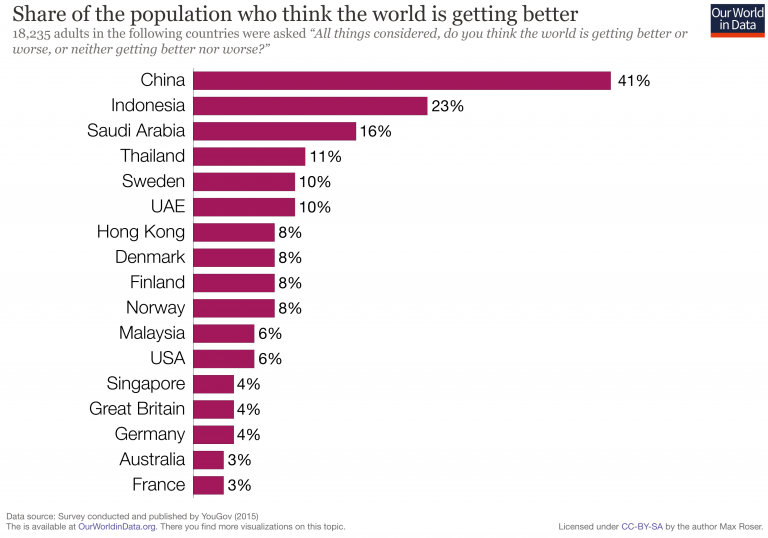 Considering these facts against the, at least seemingly, common conception that the world is heading in a negative direction yields a paradox. Why are we so pessimistic? Some of the reason can be attributed to decreasing growth in standard of living. If one look at the share of people thinking that the world is improving, the western industrial world seems to have lost motivation with numbers below 10% (US 6%) while China is steaming forward with more than 40% that think the world improves. This is probably linked to the resent boom in living standard for the Chinese while western industrialised countries experience a slower growth since the top in the fifties - sixties. But it does probably not count for all the pessimism. Much of the effect may stem from our human trait of feeling united when faced with an external threat. Fuelling fear is an easy and effective way to gather supporters and is widely used by politicians, military and business using our natural inclination to unite in our in-group against a threat from an out-group. For example the enormous buildup of the US military after WWII was driven by a mostly constructed threat from the Soviets and led to the cold war. The aggressive attitude also led to the idea that threats should be met with military force instead of relying on diplomacy. Of course everyone else did and do use the same approach - as we as humans have done since we first formed bands of hunter-gatherers. This approach has been very effective in human history, at least when viewed from the winners perspective. But, when the various chieftains preach that life as we know it will be gone unless we obliterate some threat, it affects all the tribe members, or citizens, mindset. When the same methods are used by the whole society it inevitably leads to thinking that everything is going for the worse. Especially when there is no perceived increase in living standards lately. How destructive negative expectations are is well documented and will lead to a less productive society than what would be the case if we had a positive expectation.

The question remains; why does the world improve while human nature has not really changed much in the latest 10.000 years and most people doesn’t believe that the world is heading for the better? A grim example of how thin the varnish of society is, covering over the savage human nature, is the war in former Yugoslavia. A country that was fairly civilised but returned to barbarism in a matter of days - and there’s unfortunately plenty of other examples.

Here’s the good news; being nice to each others leads to a more productive society. Each time rights has been granted to individuals, total productivity has increased. Abolishing slavery, women’s suffrage, the right to own property, equality by the law, in other words human rights in general, leads to a society that can sustain a larger population and makes the world more productive.

Fortunately, we do head in the direction of a nicer world, but it is in despite of our nature. We go in that direction because it is objectively more productive. Viewed from a wide enough scope the idea of hoarding valuables at the expense of others it is truly irrational. And the scope we must use is that we now run a planet, not a country surrounded by an infinity of resources that are up for grabs by the bold. And even if we fix the scope problem, we will face the challenge that the complexity grows and becomes unmanageable. Without better tools for handling it, the growth of potential value will level out.

It is my conjecture that giving individuals the means to truly control their personal identifiable information will lead to higher productivity for the society as a whole and as a bonus decrease complexity and I challenge you all to prove or dis-prove it.

The real irony of this is that many individuals oppose giving rights to others and declares that it leads to less productivity, effectively stating that they don’t understand the dynamics of economy at all. 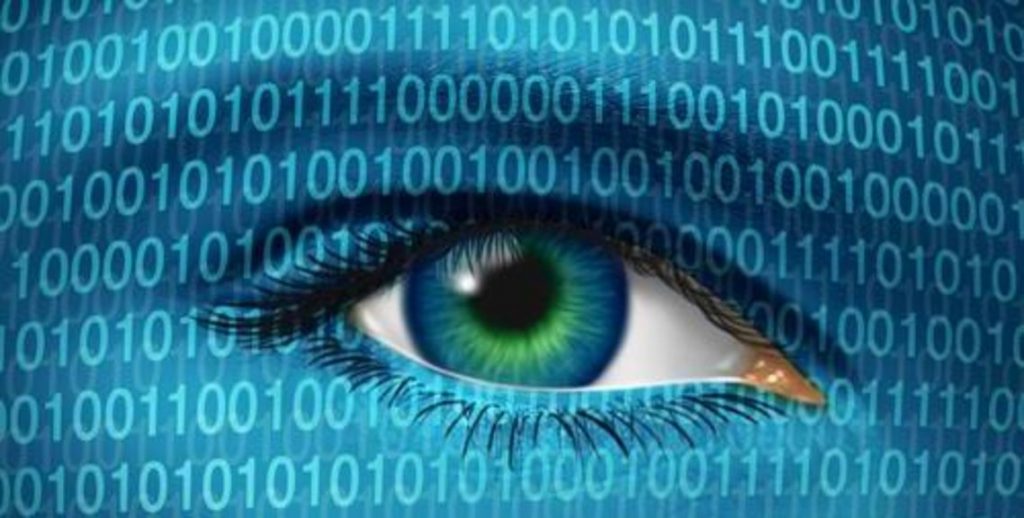